Studded with shimmering treasures from its Romanesque and Baroque past and cradled in the lush Alpine foothills of the province of Novara, Lake Orta has for centuries inspired captivating tales of saints, heroes and philosophers. While visiting Lake Orta in the 19th century, French writer Honoré de Balzac described it as a gem amongst the vast green, yet the beauty of the lake has remained clandestine amidst the grandeur of Northern Italy’s larger lakes. Offering a portrait of Piedmont that many people seldom get to know, this sleeping beauty weaves a fairy tale story of serene waters and a lullaby of rustling leaves. 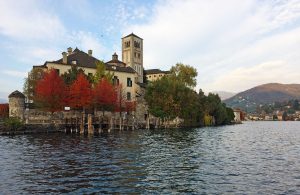 Crowning the center of Lake Orta, the island of San Giulio is one of the smallest islands in Northern Italy, yet it is home to the Basilica de San Giulio, a Benedictine monastery built in the Romanesque style. Know for its characteristic bell towers and unique position along the island’s waterfront, the Basilica offers a splendid swirl of architectural styles blending the Romanesque with the Baroque, and features interiors adorned with original frescoes and ancient works of art dating back to the medieval period. Today a place of meditation and reflection, the mythology surrounding the island is rooted in intrigue. Legend has it that before the 4th century, the island was a habitat for dragons, serpents, and monsters, with the local people afraid to even go near it. When San Giulio chose the island to build the Basilica, it is said that no boatman was willing to ferry him across the water. Undaunted, San Giulio is said to have used his cloak as a raft and once on the island, destroyed all of the beasts, building the Basilica on the island’s highest rock. In commemoration of the event, builders and masons would arrive to the island on January 31st, the Feast Day of San Giulio, for a celebratory mass. While the tradition gradually disappeared over the centuries, today, the annual Poetry on the Lake celebration has become the island’s grandest event, as poetry readings, workshops, music, and dance performances take place over a long weekend in Autumn.

With its well-preserved Baroque architecture, romantic rows of chestnut trees and car-free cobblestone streets, the main town of Lake Orta is small in size but immense in charm and lakeside beauty. Within Piazza Motta, the square that overlooks the island of San Giulio, travelers can find quaint boutique shops, cafés and restaurants nestled inside ancient buildings and along narrow streets. On the neighboring hillside of Sacro Monte di Orta, a network of chapels built between the 16th and 18th centuries in Mannerist, Baroque and Rococo styles, sit amongst dark green forests that give way to magnificent views overlooking the lake.

A landscape permeated with such an alluring sense of serenity, that it would inspire the likes of Nietzsche, with his own supposed love story unfolding beneath the secretive shade of such leafy trees. In the summer of 1882, the German philosopher Nietzsche spent a few days visiting Lake Orta with Lou von Salomé, whom he had become acquainted with through mutual friends during the trip. Perhaps resulting from a landscape of mystical chapels, aromatic flora and fresh air, a romantic mythology surrounds Nietzsche and Salomé’s meeting on the lake, with speculation that the philosopher fancied his new friend to such extent that he allegedly proposed to Salomé as they descended from the Sacro Monte. She however, is said to have declined his proposal and the two went their separate ways. Whether a fictitious tale spun from a chance meeting within an intoxicating locale, or perhaps rooted in some truth, Nietzsche would go on to reference “von Orta an”, translated as “from Orta onwards” to date his master work, Thus Spoke Zarathustra. It is while sitting on the benches lining the waterfront of Piazza Motta, admiring boats as they slowly circle Isola San Giulio, that one feels connected to the romance of the lake. A truth acknowledged through blissful observation of the lake’s own natural enchantment, which is where its most mystical allure can be found.